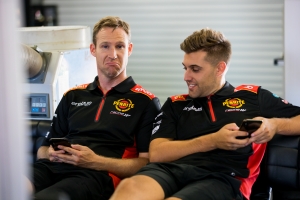 Penrite Racing driver, David Reynolds came away with a solid first effort in Round One of the BP Supercars All Stars Eseries.

The 34-year old who was a little uncertain of the online simulator world, certainly didn’t disappoint. The night included a total of three races, the first two held at iconic Phillip Island and the final race at Monza.

“I had fun out there, though half the time I had no idea what was going on. It’s a weird feeling, it’s not reality. For 20 years of my life I have learned to drive a car feeling the grip of the tyre and all the fear is gone so it’s just weird.

“The hardest thing about it for me was just doing a lap and not crashing, though I think I did a pretty good effort to string a few good laps together and I even managed to be up the front for a bit which was good.

“I hope the fans enjoyed it. It looks like there has been a great reaction to the series overall and hopefully it gives the fans as much as the drivers something to look forward to and get involved in each week for the next nine weeks. It’s great that we can still stay in touch with the fans and the series and feel like we are keeping the sport up there and in touch.”

Round Two kicks off April 15th at Silverstone and Barcelona and will be live on Fox Sports 506 and Kayo at 7pm AEST. Live streaming is also available via Supercars’ Facebook page as well as Penrite Racings’ Facebook page.

Reynolds claims a personal best in his return to the Eseries at the Mountai...
Scroll to top