David Reynolds has charged to fifth in the 2022 Repco Supercars standings after two third places and a fourth as the series returned to Winton Raceway for the first time since 2019. The event saw Races 13, 14 and 15 of the season completed, all 36-lap battles around the 3.0-kilometre, 14-turn technical layout.

Winning two ‘snowboard’ trophies for a pair of podiums, Reynolds was quick out of the box at Winton after predicting lap times would fall – the #26 Penrite Mustang shattered the lap record in practice and looked set to challenge for pole in qualifying for the first of the weekend’s three races, only to see Reynolds start seventh on the grid.

“We had a really good test day about a week-and-a-half ago. Basically we rolled out really fast and every time they tried something we went slower, so we went back to how we rolled out at the test day and the car’s an absolute jet,” Reynolds said. “The boys put a lot of work in this year and it’s paying off.”

Race 13’s start saw Reynolds immediately jump to sixth place with a superb launch before passing team-mate Lee Holdsworth for fifth place. The #26 Penrite Mustang was the fastest car on the circuit as the pack started to pit on Lap 12. The lead drivers peeled off for Reynolds to climb up to third position, which turned into the lead once Shane van Gisbergen and eventual race winner Cam Waters pitted.

Reynolds played the long game and remained one of the quickest cars on the track until he pitted on Lap 25. Fitting two tyres to the passenger side, the fresh tyres saw Reynolds rejoin in fourth before charging past Chaz Mostert for the final podium position, setting the race’s fastest lap in the process. The fastest lap netted Reynolds additional five championship points, with the team asking him to conserve fuel with three laps of the race remaining.

“Our strategy was to pit earlier, like Lap 10, but everyone started filing in ahead of me and my car sort of got better, so we just stayed out until it [the tyres] started to go off, so it worked perfectly. P3 was about it.”

Sunday saw two 10-minute qualifying session and Races 14 and 15. Reynolds pushed the #26 Penrite Mustang to third on the grid for Race 14 and sixth for Race 15.

“Today our car wasn’t as flash, it wasn’t as sharp in the front, so we’re a little bit down the order, but we’ll sharpen up for the race and see how we go – it was pretty good yesterday in the race.”

Race 14 saw Reynolds charge off the line but was boxed into fourth position on the rear bumper of Mostert. As the pit-stops kicked off on Lap 5, Reynolds stayed glued to Mostert’s rear bumper until the Walkinshaw Andretti Commodore pitted on Lap 15. With the leaders pitting, Reynolds moved up to the race lead before coming in on Lap 23.

The 4.4-second stop saw Reynolds rejoin to hunt down Mostert once again before passing Will Brown for third place, closing the gap to second-placed Cam Waters before taking the chequered flag.

“Thanks to the other guys who pitted early – that sort of helped us! Then after the stop I had to pass Will and Mostert, and then I wasn’t fast enough to catch the other two. All in all great from the boys, great pit-stops.”

The final race of the weekend saw Reynolds in a stunning start from sixth on the grid. Rocketing off the start, the #26 Penrite Mustang launched to fourth place, challenging Shane van Gisbergen for third in a cracking first few corners. More drivers followed Reynold’s strategy of a later pit-stop, with van Gisbergen pitting on Lap 23 before Reynolds himself from the race lead in Lap 24.

Rejoining in sixth, Reynolds was picked off by Will Brown, before quickly regrouping to pass Brown on the same lap, taking fifth place at Turn 10 which shook out to fourth once all the lead pack had pitted.

“Not too displeased – I think we’re the highest scoring team out of everyone, so we’ve done a good job, I just wanted a bit more. We rolled out so fast, and it didn’t go our way in both qualifying sessions, and we had to fight our way through, so – two podiums and fourth, it’s still pretty good.

“Last year, we were happy with tenth, or ninth or eight, but now I’ve got fourth and I’m a bit disappointed, but all-in-all we’ve learnt a lot, we’re still learning this car and this package.”

Reynolds leaves Winton Raceway on 966 championship points to be fifth in the standings, jumping from seventh before the weekend after a remarkably consistent run.

The #26 Penrite Mustang will next race at Hidden Valley in Darwin on 17-19 June for the Merlin Triple Crown. Tickets are available here. 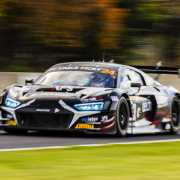 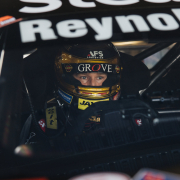 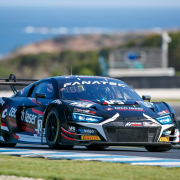 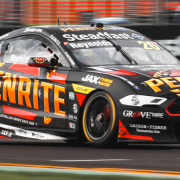 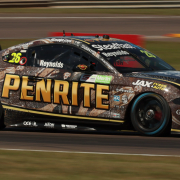 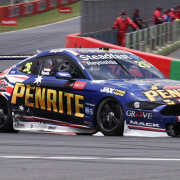 Reynolds sets up for Darwin Supercars
Scroll to top