Hot on the heels of his first podium finish of the V8 Supercars season at Sandown last weekend, global Dash Cam market leader Nextbase are thrilled to announce that they have partnered with V8 Supercar star David Reynolds, as they look to continue to build momentum after their impressive launch in Australia and New Zealand in September 2020.

The partnership will allow Nextbase to help Reynolds raise awareness for his ground-breaking Curb The Rage initiative, which focuses on reducing the incidence of road rage. Reynolds said he was excited to be partnering with a brand who are so focused on road safety and share his desire for sustained excellence in performance.

“I’m excited to work with Nextbase to have an impact on people’s behaviours on Australian roads, and to continue to raise awareness for Curb The Rage as well,” Reynolds said.

“Curb The Rage is something I have completely funded myself, that’s how much I believe in it, and it’s great that Nextbase will also invest directly into Curb The Rage.

“I’m also excited to align with Nextbase because they are the market leader and create such excellent products – like me, they are committed to constant improvement and are aspirational. Driving with a Dash Cam influences human behaviour and actions on the road for the better. It’s exciting to be working together.”

Nextbase Managing Director, Richard Browning, said that entering the motorsport market in Australia was a thrill for the company, but also admitted that Curb The Rage was the conduit for the partnership.

“We became aware of ‘Curb The Rage’ two years ago,” Browning said.

“The campaign highlights one of the many reasons why Dash Cams are a growing part of our daily lives and we are proud to be supporting the campaign and Dave, who shares the same value set as we do. It also goes without saying that he is an outstanding athlete, and we’re following his progress closely as he looks to continue to collect championship points – we’re proud to support Dave.”

The Nextbase logo will feature on Reynolds’ helmet and racing suit, with activations to come on both Reynolds’ and Nextbase’s websites and social channels.

In 2020, Nextbase commissioned a research project alongside the Australian Road Safety Foundation which unearthed some concerning habits amongst Australian drivers, including that 1 in 4 Australian drivers exceed the speed limit regularly and that 17% of Australians admit to driving through amber traffic lights.

Currently, 1 in 4 Australians use a Dash Cam to record their driving and to provide greater security in the instance of an incident or accident on the road going unrecorded, with insurers becoming increasingly reliant upon the footage. 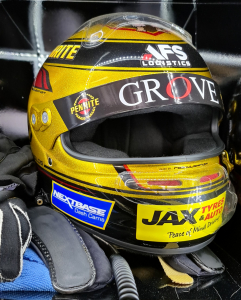 Reynolds eager to return to Symmons Plains
Scroll to top