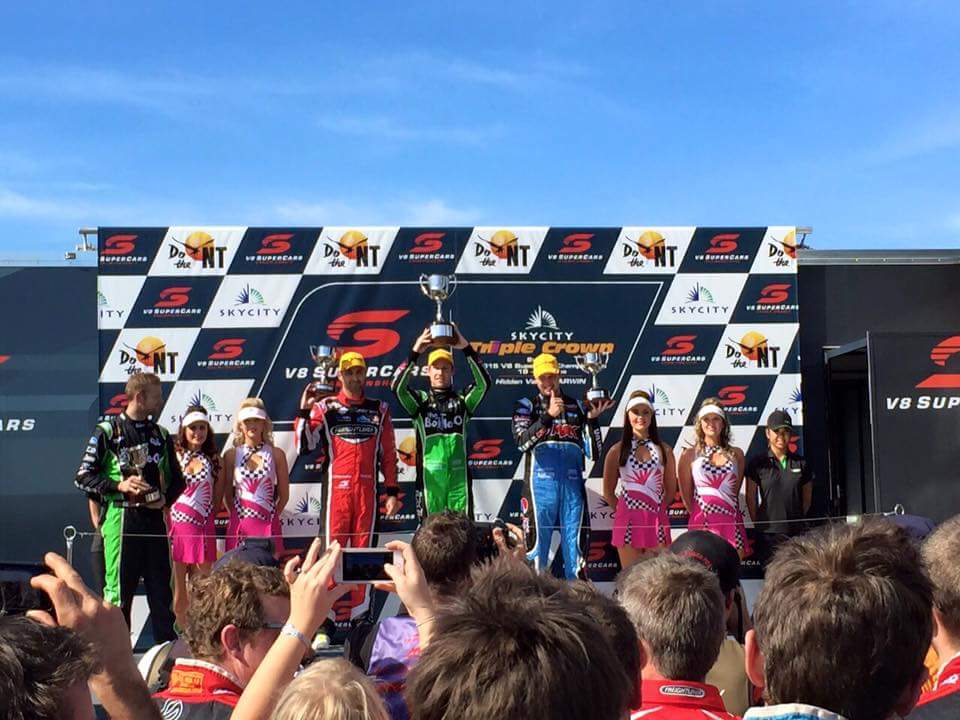 When we arrived and rolled the car out on Friday for practice, the the car felt quick. And it proved to be true when I was able to top both practice sessions and break the lap record.

Everything was set for a successful Saturday with two races ahead of us. But it didn’t go to plan…. The Bottle-O Racing Falcon lost pace with the set up we chose and we fell outside the top 10 for both races.

Both races were short and in one incident I got pushed off the track by Jason Bright. In race 1 of the weekend (Race 13 overall) I finished a lowly 16th whilst the second race of the day resulted in 10th position. Our season was on the line that night…

By Sunday the team made changes and spent a lot of time trying to find that winning formula with the car. We knew we could be quick. Practise was encouraging however qualifying would prove even more exciting. A frantic race for track position resulted in most cars hitting the track late in the session and I found the car was quick – very quick. In fact before I knew it, we had the fastest time and no one was able to get past it! The time proved quicker than Rick Kelly was able to achieve the day before on soft tyres. We did it on hards!

I started feeling a bit unwell before the race. I’m not sure if it was nerves…or the food I ate, but I was feeling uneasy. The front row was being shared between myself and Fabian Coulthard. Fabian beat me off the line and I had no option but to yield. I sat with him for a while and he was quick. But after a few laps a slower car undermined his approach and he went off the track. I could see the crowd standing up on the hill and waving.

Once I was in front I was able to extend the lead. But after I switched to my hard tyres I faced a serious issue when one of them got a puncture. I was forced to pit early and this challenged our strategy. On any other day it would have cost us the race.

I had no option but to complete the race on my soft tyres – some 40 laps. It’s unheard of to complete that many laps on a soft tyre in Darwin. But the resurfaced track was throwing up surprises every hour. Pit stop strategy started playing on me, and I noticed Craig Lowndes was making up a lot of ground. But things got worse when I came off the track mid race. I got caught behind Michael Caruso and was forced to spear off the track. I kept the car straight and clean and remerged on track. I dropped back a few seconds to ensure I didn’t take advantage of the slip and fortunately there were no penalties. Apparently the commentators thought the car was damaged….but not from where I was sitting. The car was bullet proof.

In fact the car was amazing. Credit goes to the team for an amazing job. Chaz Mostert and Fabian Coulthard continued to close in on me, and although Chaz had more tyre life left in his car, #55 felt rock solid. It was a weapon. With 5 laps to go I was actually able to pull away from both Fabian and Chaz. By lap 70 I had a comfortable gap and I knew we were in for our first victory!

I’ll take this opportunity to thank everyone at PRA for a superb preparation. We’ve been close to wins and podiums all year, so I was confident it was just a matter of time. A big thanks to all our team sponsors – this is for you! The Bottle-O, Mongrel Boots, Hogs Breath, TSW Wheels Australia, Apex Replicas and all of our terrific support sponsors.

On a personal note I was particularly pleased to win for a couple of new personal sponsors – Apex Steel and The Hush Dolls. A big thanks also to my current sponsors Harley Heaven, TSW Wheels Australia, Hogs Breath, Cannondale and GMX Quad Bikes. The support I receive from the people behind the sponsor’s logos is immeasurable!

Finally I will finish by thanking all of the fans out there. #bestv8fans!!

I’m currently in 7th position of the championship and looking forward to Townsville. See you all there.